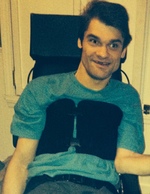 Theodore "Trey" Kramer III, 37, passed away Monday, February 12, 2018 at the Hosparus Care Center in Louisville. Trey was born in Louisville, Ky on January 7, 1981. He was born to and is survived by his parents Mimi Anson Kramer and Theodore Kramer II.
Trey was a truly unique human being. One of a kind in almost every way. His smile could light up the darkest room. Everyone who had an opportunity to spend any amount of time with him was touched or affected in some way. He had a special talent for making people see the world in a different light. He inspired others to love harder, try harder, and taught us all that compassion, above all, is the most important thing in life. In essence, he was a martyr for love and caring, and taught us what the words kindness, patience, and understanding truly meant. He is also survived by his brother Trevor Drury (Kaitlyn), his grandparents Jacques and Nancy Roney, his uncle Michael Anson (Shannon), Will Anson (Christy), his aunt Whitney Lawrence (Brennon), his uncle Jason Anson, his aunt Anne Clark, his aunt Leigh Lizer, his step-fathers Jeff Saunders and Bill Drury (Teresa), step-sister, Andrea Barker and step-brother, Cory Saunders as well as many other family members who loved and cared for him very much. He is preceded in death by his Grandfather, Michael Anson, his brother in spirit, Chad Clemerson, and his uncle Rick Lizer.
In addition to his family, Trey is mourned by many caregivers who loved him and will miss him dearly. They are Kovy Bickel, Magenta Drake, Serap Kurnaz, Leon Bell, Pamela Thomas, Katrina Coury, Jay Darden, and Michelle Byers.

To order memorial trees or send flowers to the family in memory of Theodore III, please visit our flower store.