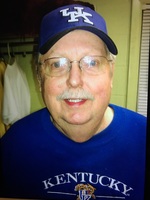 Roger O. Ballard, 73, of Louisville, entered his heavenly home on Tuesday, December 6, 2016.
Born in Louisville, Roger was a 1962 graduate of Seneca High School and was a delivery representative for Audubon Pharmacy. Roger was also a lifetime member of the American Legion Highland Post #201 and was a proud member of the 1983 National Championship Color Guard Team, as well as a valuable volunteer for their weekly Bingo. He was also a member of the Louisville Aero Club.
He was preceded in death by his mother, Frances Ballard Risinger and sister-in-law, Donna Ballard. He is survived by his father, Lenville Ballard, children, Scott (Beth), Melissa Ballard, Krista Ballard and Brandy (Tim) Oglesby, who was his caregiver, brothers, Fred, Steven (Molly), Dale (Stephanie), Jeffrin (Jean) and sister, Lisa (Terry) Parker. His grandchildren, Alicia (Eric) Rademaker, Kari (Alex) Rickard, Rebecca Ballard and 3 great grandchildren also survive.
A service celebrating Roger's life will be held 3:00 pm Saturday at Louisville Memorial Gardens Funeral Home East, 11601 Ballardsville Rd. A gathering of family and friends will be from 11:00 am Saturday at the funeral home until service time. A Sons of the American Legion Honor service will be held at 2:00 PM.
Memorials are suggested to WHAS Crusade for Children.

To order memorial trees or send flowers to the family in memory of Roger Ballard, please visit our flower store.