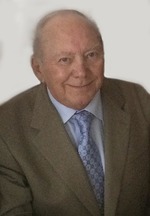 Robert "Bob" Joseph Powers died on July 5, 2018, at Baptist East Hospital in Louisville, Kentucky. Bob was born in Albany, New York, on April 29, 1940, as the third child of Mary Burgess and Robert James Powers. A classic New Yorker possessing the serious and the prickly traits of that archetype, he also was the embodiment of the midcentury man: a patriotic, competitive, master card player who wore Old Spice, drank Budweiser, and smoked Camel unfiltered cigarettes.
Bob was orphaned at a very young age and was raised with his sister Pat by their older sister Marie and her newlywed husband Tom "Bu" Buchanan. The profound role Bu and Marie played in his life cannot be overstated. At the hospital on July 5, Marie kissed his forehead as he passed and said, "Save me a seat, baby brother," reminding everyone present nothing assisted her more in getting to heaven than the trials she endured raising him.
After high school graduation in 1959, Bob entered the U.S. Air Force and was stationed in Myrtle Beach, SC, with extended tours in Texas, Italy and Florida. Following four years in the service, he went to work as an engineer at Washington Gas Co., from which he retired in 1997. He married Dee Anne Borland in August of 1967, and that "red-headed girl" remained the love of his life for 52 years, preceding him in death by only two months. Although Bob's sudden departure from this world was shocking, no one who knew this couple could imagine one being without the other; they truly lived the Christian understanding of marriage, with the two becoming as one.
They had two children: Rob in 1971 and Jennifer in 1973 - and if a single word described Bob it was "provider" as he always put his family's needs above his own, especially when it came to working overtime and on holidays to provide a nice life for the Powers' household.
His beloved Jennifer married a West Pointer, Jimmy Freeman, in 1995, a union which delivered his most significant role in later life - that of grandfather. "Papa," as grandsons Andrew and Patrick referred to him, was always their best buddy, excited about the next fishing trip or chess tournament with his boys.
In 2005, he and Dee Anne moved to Louisville, KY, where they found an active life at the "Center" focused on Texas hold'em and lively political debates with a caring and supportive network of friends. In recent years, dialysis slowed Bob's hard-charging ways, which accelerated a decline that began when his daughter Jennifer died in 2014, a loss from which he never recovered.
Robert Joseph Powers is survived by son Robert J. Powers of Washington, D.C., son-in-law Jimmy Freeman and grandsons Andrew and Patrick Freeman of Fort Smith, AR. The family asks only for prayers for the repose of his soul, and instead of flowers, donations can be made in Bob's honor to any St. Vincent de Paul Society.

To order memorial trees or send flowers to the family in memory of Robert Powers, please visit our flower store.