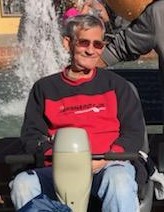 Rickey B. Searcy, 65, of Pewee Valley, passed away on December 13, 2019 at University of Louisville Medical Center.  He was born on August 4, 1954 in Louisville Kentucky, the son of the late Ray and Margaret Searcy.

Rickey is preceded in death by his parents, Ray and Margaret Searcy, brother, Roger Searcy, and grandson Jodie Russell.

I lieu of flowers, the family requests donations be made in Rickey’s honor to The James Graham Brown Cancer Center, 529 S Jackson Street Louisville, KY 40202.

To order memorial trees or send flowers to the family in memory of Rickey Searcy, please visit our flower store.