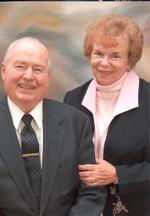 Rev. LaVern H. Snyder, 83, husband of Peggy Snyder, died Saturday August 9, 2014 at his residence. He was born in Paynesville, MN. December 16, 1930 the son of the late Alvin & Minnie Kohler Snyder.
Rev. Snyder had pioneered many churches in Ky. including Hartford, Versailles, Lexington and Salem Assembly of God in Pewee Valley where he pastored for 39 years. He was a 1953 graduate of North Central Bible College (now North Central University in Minneapolis, MN.) and had served on the Kentucky District Presbytery Board for 43 years along with many other memberships, appointments and achievements.
Besides his wife of 61 years he leaves to cherish his memory, children, Janice Snyder Ogletree (Eddie) and Timothy Wayne Snyder (Lisa), brother Leslie Snyder (Ruby), and sister-in-law, Lois Snyder. 4 grandchildren and 7 great grandchildren also survive. He was preceded in death by three sisters, Evelyn Nelson, Edith Miller and Dorothy Harapat, 2 brothers, Harry Snyder and Herbert Snyder.
A service celebrating Rev. Snyder's life will be held 2:00pm Tuesday August 12, 2014 at Salem Assembly of God Church with burial to follow at Louisville Memorial Gardens East. Visitation will be Tuesday at the church from 12:00 until service.
Louisville Memorial Gardens Funeral Home East is in charge of arrangements.
Memorials are suggested to Salem Assembly of God Church.
Condolences may be made at www.lmgfuneralhomeeast.com

To order memorial trees or send flowers to the family in memory of Rev. LaVern Snyder, please visit our flower store.