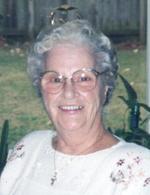 Nellie W. Cross, 89, wife of the late Hubert Cross, died Saturday, November 29, 2014 at Westport Place.
She was born in Spencer County September 1, 1925 the daughter of the late Leslie & Leota Gray Palmer. Nellie had retired as a nurses aid from Central State Hospital after 31 years.
She is survived by her children, Vicki Carol Croghan (W.T.) and H. Wayne Cross Sr., one sister, Dollie Staples, three grandsons, Michael Littrell, Wayne Cross Jr. and Brian Cross. Six great grandchildren also survive.
Besides her husband of 46 years she was preceded in death by 8 brothers and sisters.

To order memorial trees or send flowers to the family in memory of Nellie Cross, please visit our flower store.