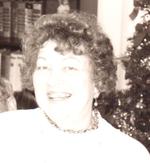 Naomi Cummings, 79, wife of the late Bill Cummings, died Friday, November 14, 2014 at Renown Regional Medical Center in Reno, Nevada. She was born in Middletown, Ohio January 16, 1935 the daughter of the late Thomas & Pearl Jones Sullivan.
She is survived by her sons, Stephen (Rebecca), David (Patricia), Jeffrey and Patrick (Amy) Cummings, sister, Barbara Nelson, brother, Guy Sullivan, son-in-law, Craig King and nine grandchildren.
Besides her husband she was preceded in death by her daughter, Mary Elizabeth King and one son, Richard Kent Cummings.

Condolences may be made at www.lmgfuneralhomeeast.com

To order memorial trees or send flowers to the family in memory of Naomi Cummings, please visit our flower store.