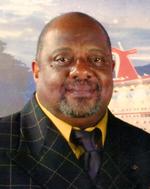 Michael J. Byrd, 70, loving husband to Patricia Chisholm Byrd, passed away at home on Monday February 1, 2016. Michael was born to the late Robert H. and Victoria Moss Byrd in Columbus, Ohio on May 29, 1945. He was also preceded in death by a great-grandson, Da'sion Chisholm.
Michael lived his early years in Pittsburgh where he became an avid Steelers fan, later he moved to Louisville and worked at Ford for 36 years as a welder. He was a family man that loved to fish and once received a certificate from the Lyndon Fire Department for saving someone's life by performing CPR.
Besides his wife of 44 years, he is survived by children, Michael, Jr., Leslie, Anthony Byrd, Charles Davis, Robert, Bryon, Joseph Chisholm, Isaac Byrd (Shelffon), 17 grandchildren, and 2 great-grandchildren with several nieces, nephews and cousins. He also has 17 siblings.

To order memorial trees or send flowers to the family in memory of Michael Byrd, please visit our flower store.