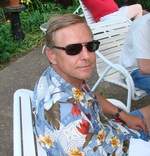 Mark D. Inmon, 57, father of Elizabeth "Liz" and James Inmon , died October 15, 2014 at his residence. He was Born in Louisville February 26, 1957 the son of the late James C. & Jane Miller Inmon.
Mark was the former owner of Inmon Insurance and was a member of First Christian Church Disciples of Christ at 7700 U.S. Hwy. 42.
Besides his children he is survived by their mother, Suzy Inmon, sister-in-law, Diane Inmon, aunt, Bobbie Inmon and cousin, Frank Miller. Many nieces, nephews and great nieces & nephews also survive. He was preceded in death by his brother, Stephen C. Inmon.
A service celebrating Mark's life will be held 4:00 PM Sunday, October 19, 2014 at Louisville Memorial Gardens Funeral Home East, 11601 Ballardsville Rd. A gathering of family and friends will be held from 1:00 pm Sunday at the funeral home until service time.
Memorials are suggested to Alley Cat Advocates, 3044 Bardstown Rd., Louisville, Ky. 40205

To order memorial trees or send flowers to the family in memory of Mark Inmon, please visit our flower store.