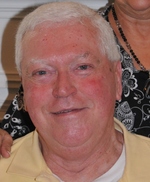 Lawrence "Larry" Louis Herzog, Jr., 74 of Louisville, KY passed away on October 17, 2015. Loving husband of Ruth Ann for 53 years; beloved father of Christine Miles, Lisa Waring (James) and Susan Clinkscales (Michael); cherished grandfather "Pops" of 7; Drew, Jacob, and Claire Miles, Jonathan and Matthew Waring, and Michael and Madelynne Clinkscales. Larry was the oldest of 7 children born to Lawrence and Mary Edna "Betty" Herzog, and is survived by 6 siblings, Dan (Mary), Mary Jo (the late, Jerry), Mark (Denise), Steve (Linda), Alice (Mike) and Nina (Gary) and their families, including 12 Nieces and Nephews and the late, George McCall. Larry graduated from the University of Cincinnati, College of Pharmacy in 1961. He retired from Walgreens after 38 years of service. Larry's love of flying began as a hobby, but he soon became a dedicated flight instructor and mentor to many, serving over 33 years in the Civil Air Patrol (Auxiliary of the U.S. Air Force), where he achieved the rank of Lt. Colonel. He received the Kentucky Distinguished Service Medal for outstanding performance of duty on September, 11, 2001, flying the only Civilian aircraft in the skies while all other air traffic was grounded. During this mission, he transported lifesaving blood products and medical equipment to aid the victims of 9/11. Larry touched many people during his lifetime and he will be greatly missed. He has a new set of wings and will fly high in the skies. A visitation will be held Wednesday, October 21, 2015 from 4-8 p.m. at Louisville Memorial Gardens Funeral Home East, 11601 Ballardsville Road, Louisville, KY 40241. A funeral mass will be held on October 22, 2015 at St. Margaret Mary Church, 7813 Shelbyville Road, Louisville, KY, 40222 at 10 a.m. Interment will follow at Louisville Memorial Gardens East with Color Guard presented by Civil Air Patrol. In lieu of flowers, donations may be made to the Civil Air Patrol Foundation to assist in the training and development of future Cadets as a legacy to his committed service by visiting www.capfoundation.com, to the American Diabetes Association, or to Hosparus, of Louisville, KY. The family encourages you to leave an online condolence or share a memory by visiting the funeral home website at www.lmgfuneralhomeeast.com.

To order memorial trees or send flowers to the family in memory of Lawrence Herzog Jr, please visit our flower store.