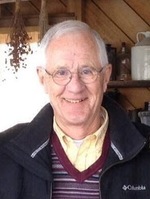 John J. Lantz III, husband of Dale Johnson Lantz, died Tuesday, August 12, 2014 at Baptist Health in Louisville, KY. John was born in Brooklyn, NY on July 30, 1942 to the late John J. Lantz, Jr. and Clara Morgan Lantz. He made his life in Northern Virginia before moving to Louisville in 1997.

John was a loving husband, father, brother, and grandfather. He is survived by his devoted wife of 40 years, Dale Johnson Lantz; 3 adoring children, Kevin (Angela), Christine, and Jeffrey; 2 grandchildren, Liam (4) and Harper (2); 2 sisters, Judith Kenney (Joe) and Jane Lantz and many nieces, nephews and friends.

John was a Vietnam Era service member who was honorably discharged from the United States Air Force in 1966 and he retired from the United States Census Bureau in 1999. Early in his employment at the Census Bureau, John met the love of his life, Dale. John was not defined by his career, but rather by the time he spent in leisure and the love of his family. John's devotion to his family was highlighted with the recent time spent with his grandchildren, which he adored. Throughout his life he was known as a motorcycle racer, a Cessna pilot, a runner, skier, and passionate golfer. John was very proud of his many golfing achievements. He was voted "Wittiest" in his high school class and his sense of humor continued to the delight and aggravation of many.

To order memorial trees or send flowers to the family in memory of John III, please visit our flower store.