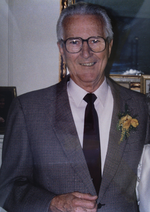 Jack H Andrew, 94, passed away on December 21, 2017.
He was born Nov. 1, 1923 to the late George and Myrtle Andrew in Schenectady, NY.
Jack served in the Army Air Corps. during World War II. He married his high school sweet heart Viola Vander Werken and they shared 63 years together until her death in 2007.

He played and enjoyed baseball and basketball, enjoyed bowling, golf and woodworking. He was also was a long time member of Hurstbourne Christian Church, Louisville , KY..

A service celebrating Jack's life will be held 12:00 pm Thursday, December 28, 2017 at Louisville Memorial Gardens Funeral Home East, 11601 Ballardsville Rd. Burial will follow at Louisville Memorial Gardens East. Visitation will be Thursday from 11:00 am until service time.
Memorial Contributions can be made to Hurstbourne Christian Church 601 Nottingham Parkway, Louisville, Ky. 40222
Condolences may be made at www.Lmgfuneralhomeeast.com

To order memorial trees or send flowers to the family in memory of Jack Andrew, please visit our flower store.