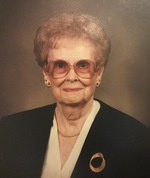 Irene Dunn Cardwell, 95, passed from this life Tuesday, March 8, 2016 at her home in Hagerstown, MD. She was born October 20, 1920 in Grayson, Kentucky, daughter of the late John T. Dunn and Flora Galloway Dunn.

Irene was a member of First Christian Church in Hagerstown. She was an avid reader and enjoyed crafts and playing Scrabble and card games.

As an Army wife, she lived on Army posts in Germany, Oklahoma and Louisiana. Irene worked as a payroll accountant for USAA Insurance Co in San Antonio, Texas where she lived with her husband and children for many years. She later worked for the Department of the Army in Hampton, VA, Ft. Sheridan, IL, Philadelphia, PA and Washington, DC, retiring as a procurement analyst from the U.S. Army Corps of Engineers in 1986. After retirement she owned and operated the Books 'n' Things store in Falls Church, VA, Hagerstown, MD and Hardinsburg, KY.

Irene was a Colonel in the Honorable Order of Kentucky Colonels and a lifetime member of the Order of the Eastern Star.

Visitation one hour prior, followed by a funeral service will be held 11am, Monday, March 14, 2016 at Louisville Memorial Gardens Funeral Home East, 11601 Ballardsville Road, Louisville, KY.

In lieu of flowers memorial donations may be made to Diakon Benevolent Fund, Village at Robinwood, 19800 Tranquility Circle, Hagerstown, MD 21742.

Online condolences may be posted at www.minnichfh.com

To order memorial trees or send flowers to the family in memory of Irene Cardwell, please visit our flower store.