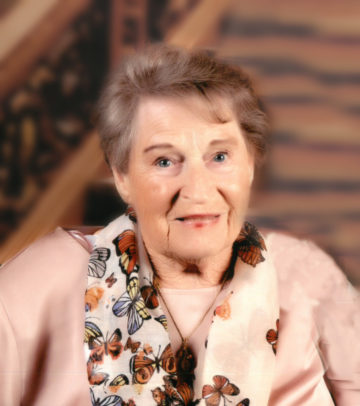 Gladys Bonkowski was received into Heaven on December 13th, 2019, at her home in Fenton, MO.

Gladys was born on November 10, 1926, in Louisville, KY to Anna Lovitsky-Shreve and Fred Shreve. Her mother passed away when she was young and was raised by her stepmother Lilly Shreve from the age of five. She married Edward Bonkowski, Jr., on February 19th, 1950. They raised four children: Lauretta, Larry, Donald and Teresa. She was heavily involved in the Assemblies of God church and up until the day she passed, found some way to continue to be a part of furthering the kingdom of Christ. She was a phenomenal artist, seamstress, and musician.

She is preceded in death by her sister Mae Graf, brother Charlie Shreve, sister Lavada Whisenant, husband Edward Bonkowski, and son Larry Bonkowski. She is survived by her brother David Shreve, and sisters Minnie Perry and Carol Burin, three children, Lauretta Foster, Donald Bonkowski, and Teresa Rudolph (husband Randy), her eight grandkids and her seventeen great-grandkids. While she will be missed here on Earth, her family knows that she is in Heaven rejoicing with the loved ones that have gone before her.

In lieu of flowers, donations can be made to Kristen Moore, Assemblies of God World Missions (Account # 297703).

To plant a beautiful memorial tree in memory of Gladys Bonkowski, please visit our Tree Store.

To order memorial trees or send flowers to the family in memory of Gladys Bonkowski, please visit our flower store.