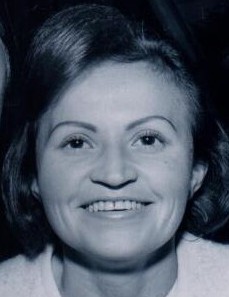 Gertrude "Trudy" Denny at the age of 84 peacefully passed away Sunday January 31st, 2021 in Louisville, Ky. She was born in Unter-Tannowitz Austria (later known as Dolni Dunajovice, Czech Republic) on January 10th,1937.   As a young girl during WWII, her family was forced to leave their home in Unter-Tannowitz as land was divided amongst separate countries. The family then settled in Germany. Mannheim, Germany was her home until she was 21 years old. She then traveled by ship to Canada and connected with her brother, John Voith. After being granted authorization, they both entered the U.S. and settled in California for many years.   Living in California she meet the love of her life William "Bill" Denny. Both hard workers in the restaurant industry, she worked as a waitress and he was a chef for many years. They shared 55 loving and adventurous years together and during that time moved from California to Kentucky. They took care of each other and raised their daughter, Diana, and granddaughter, Hannah.  Trudy was both a skilled & loving cook who took great pride in everything made. She was also an avid reader who genuinely enjoyed all genres of literature. Yet, she had a love for nonfiction specifically. Alongside her love for in non-fiction stories, she valued the importance of history, politics, and current events. She cared not only about events in Germany and the United States, but all countries.
She is preceded in death by Johann & Maria Voith (father & mother), Maria & Theresia Voith (sisters), Johann Voith (brother). She is survived by her loving husband, William "Bill" Denny; sisters, Johanna and Rosa Voith; daughter, Diana Ballerstedt; and granddaughter, Hannah Ballerstedt.
Always enjoying an in depth conversation, she will be remembered for being a great listener, resilient hard worker, caring, open minded and most of all a loving wife, mother, and Oma. Auf Wiedersehen und Wir Lieben Dich, Oma.

Due to the Covid-19 pandemic, the memorial service will be small and private.

To order memorial trees or send flowers to the family in memory of Gertrude Denny, please visit our flower store.