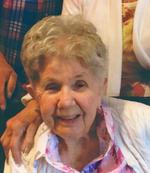 Edna Cease, 103, wife of the late Francis Cease, died Wednesday, November 2, 2016 at The Providence Richwood in LaGrange, Ky.
Edna was born in Venice, Illinois on July 23, 1913 the daughter of the late William & Daisy Risinger Ferguson. She had been a bookkeeper and secretary as well as a homemaker for most of her life. Edna was a member of the Nameoki Presbyterian Church in Granite City, Illinois and had been a volunteer for many years at Saint Elizabeth Hospital in Granite, City. She was also an avid golfer and fisherwoman.
She leaves to cherish her memory, children, Carol Skinner (Michael) and Bill Cease (Bunnie), granddaughter, Amy Gogul (Chris) and 2 great grandchildren, Anna & Max Gogul. She was preceded in death by her Sister and Brother, Lorena Tibbs & Thomas Ferguson.
Memorials are suggested to the Susan G. Komen Breast Cancer Foundation.

To order memorial trees or send flowers to the family in memory of Edna Cease, please visit our flower store.