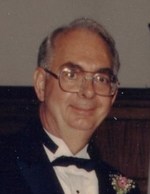 Douglas D. McGrath, 89, passed away on July 19, 2018, with his wife and son by his side. Doug was born January 14, 1929, in Brockport, NY. He was an Army veteran, and a graduate of Michigan State University. In a nearly 40 year career as a chemical engineer, Doug worked for Union Carbide, Rohm & Haas, Celanese, and BASF, from which he retired.

Doug was preceded in death by his parents, Gertrude and John McGrath, and by his only sibling, an older brother, Wendell McGrath, by thirteen days. He was also predeceased by his daughter-in-law, Brenda Begley McGrath. Doug is survived by his wife of 60 years, Carol Collins McGrath, a son, Dr. Mark W. McGrath, two grandsons, Matthew and Daniel McGrath, sister-in-law Lori McGrath, three nieces and their families.

Doug had expressed the desire to be cremated, and that has been done. There will be no memorial service or funeral. Doug's ashes will be intered with his wife's casket at Louisville Memorial Gardens East upon her passing.

To order memorial trees or send flowers to the family in memory of Douglas McGrath, please visit our flower store.