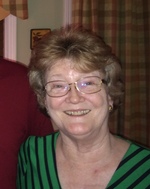 Dee Anne Powers passed away on April 30, 2018, at Baptist East Hospital in Louisville, Kentucky, after a very brief illness. Dee Anne Borland was born in Washington, DC, on October 20, 1945, to Wilfred and Doris Borland. She grew up in Falls Church, VA with her three brothers and sister. Dee Anne enjoyed spending time on her uncle's ranch during the summers of her childhood in her mother Doris' native Nebraska. After graduating from James Madison High School in Vienna, VA in June of 1963, she entered the professional world where she met Robert "Bob" Powers after work in 1966. She often recounted their first date at Glen Ecco (amusement) Park, and how her future husband had not explained what or where they would be going so she had on high heels and a fresh hairdo to ride a roller coaster. She and Bob married at St. Leo's Catholic Church on August 19, 1967. Fifty two years later, he remained the love of her life. Two children followed: Rob in 1971 and Jennifer in 1973. Along with two kids to raise and a busy career at PreSearch Inc., where she was Director of Administrative Services and Security, Dee Anne always remained an avid reader, became a master cross stitcher, and a truly gourmet chef. Her passion for cooking never waned, always being eager to try new recipes. The greatest passion of the second half of her life was being a grandma. Her first grandson Andrew was born May 19, 1999, and Patrick followed on August 31, 2001. "Scram," as she was affectionately referred to by toddler Andrew, who found it complicated to pronounce grandma, remained resolutely focused on being the best grandmother, planning trips to Disney World and staying abreast of the latest evolution in her grandsons' toy tastes, from Thomas the Tank Engine to Transformers. Dee Anne and Bob left the Northern Virginia area in 2005 to retire to Louisville, KY. In Louisville, she had a supportive and vibrant clan of friends centered around "the Center" and playing Texas hold'em. She and Bob traveled extensively, and Dee Anne loved to cruise the high seas. Throughout her life, many health issues, and the loss of a child in 2014, Dee Anne always rebounded with resilience. Her drive and "move forward" attitude permeated all she did. Personifying the ethic of fellow Virginian Thomas Jefferson that, "The earth belongs to the living," she would want those she knew to remember her by being kind and taking care of each other. Dee Anne is survived by husband Bob Powers, Louisville, KY, son Robert Powers of Washington, DC, and son-in-law Jimmy Freeman and grandsons Andrew and Patrick of Fort Smith, AR. Her daughter Jennifer Freeman preceded her. The family asks for prayers for the repose of her soul, and in lieu of flowers requests that donations be made in her honor to assist challenged veterans at Interlink Counseling Services, Inc., 8311 Preston Hwy. Suite B Louisville, KY 40219.

To order memorial trees or send flowers to the family in memory of Dee Powers, please visit our flower store.