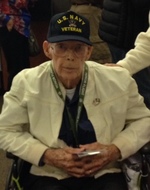 Dean M. Stewart, 93, husband of Carol Stewart, died Monday, October 24, 2016 at his residence. Dean was born in Riverdale, Utah, May 30, 1923. He had been a Produce Manager for several major markets in California and was the owner/operator of Stewart Signs. He was a World War II Veteran having served in the U.S. Navy and was a member of The Church of Jesus Christ of Latter-Day Saints, 7115 West Hwy 22, Crestwood, Ky. 40014
Besides his wife of 40 years he leaves to cherish his memory, 1 daughter, Lynn Mangle, 2 sons, Neil Stewart (Janice) and Wynn Stewart (Anna-Greta), 1 step-daughter, Cheryl Akers (Darren) and 2 step-sons, Greg & Ron Chernak. 4 grandchildren, 2 great grandchildren, 2 step grandchildren and numerous brothers & sisters also survive.
A service celebrating Dean's life will be held crypt-side 11:00 am Wednesday, October 26, 2016 at Louisville Memorial Gardens East, 11601 Ballardsville Rd.
Louisville Memorial Gardens Funeral Home East is in charge of arrangements.
Memorials are Suggested to Dean's Church.

To order memorial trees or send flowers to the family in memory of Dean Stewart, please visit our flower store.