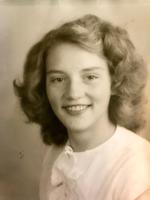 Christina H. Bowling (nee Hacker) 86, my mother, passed away peacefully the evening of October 16, 2017.
She had been ill off and on since December and this time she was just too weak to recover. However, no one was stronger in spirit than she.
She was born in Clay County, Kentucky on White's Branch on November 24, 1930. She attended a one room school taught by her aunt and went on to high school where she was valedictorian of her senior class in 1948. She rode the Black Brothers Bus to Union College in Barbourville, Kentucky graduating cum laude, with a BS in education in 1953 and a Masters degree in 1963.
She taught school in Clay County and moved to Louisville, Kentucky after her marriage to Cecil Bowing in 1952. In Louisville, she taught first grade for many years and advanced to principal at St. Matthews Elementary School.
A devastating stroke on April 24, 1988 brought an end to her educational career. She was cared for by my father until his death in 2014. She enjoyed reading, visiting with friends, cooking, and University of Kentucky basketball. She was also a member of Delta Kappa Gamma Professional Sorority.
She was preceded in death by her parents, Nettie and Letch Hacker, her sisters Geraldine H. (Boots) Smith and Norma Hacker, her brothers Lowell Hacker and Calvin Hacker, and her husband of 62 years, Cecil Bowing.
She is survived by her favorite son-in-law, Joseph (Jay) Mudd, her grandson, Jason Bowling Mudd (Tara), her great-granddaughter, Carter Jean Mudd, and me, her daughter, Leslie Ann Bowling Mudd. All of her brothers and sister are gone, but she is survived by her niece, Kristi Smith Garrison (Jeff) and her nephew Kenneth Letcher Smith (Renee) and their families, and many other family members. Her yellow Lab, Emma, will be lost without her.

To order memorial trees or send flowers to the family in memory of Christina Bowling, please visit our flower store.