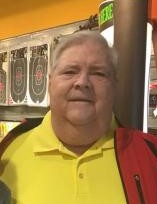 Passed from this earth into the arms of Jesus on April 20, 2020.   He is survived by his devoted wife of 51 years Geralene Marie Staebler, his son Mike Staebler, his daughter Bethany Staebler Vornholt (Trip), his son Kenny Staebler (Kay) and his five grandchildren Caleb, Olivia, Caitlyn, Abigail and Henry.

Our Dad was not a man of obstacles … he saw life’s challenges as problems to solve and attacked them with a positive can-do attitude.  He consistently exhibited thoughtfulness and grace to anyone he knew.    He regularly used humor to bridge connections with people and he always let people know how much they meant to him.   He was a Christian and member of Southeast Christian Church.   His walk in faith lead him to truth that Jesus Christ was the son of God who died for our sins and as a baptized believer Dad was most interested in leading people to the truth of Jesus.

In his work-life Dad served in the United States Navy for 4 years as a weapons officer on a fast attack submarine. He then went on to complete 20 years in the Navy Reserves rising to the rank of Captain.  He had a 26 year career as an Electrical Engineer and Manager of Facilities for the Louisville Water Company.   Upon retirement he joined the Southeast Christian Church staff as a Facilities Project Engineer retiring for a second time after 10 years of service.     As a young man Dad obtained the Rank of Eagle scout and showed his devotion to the Boy Scouts of America by volunteering as a Scout Master for many years.

Chuck, Dad, Pops, Grandpa, buddy, best friend, old man – no matter what you called him – to know him was to love him. He loved big and he was loved big, he made a difference in this world and he will be missed.   But only for a short time. Dad, we will see you again, until then we anticipate your heavenly “teachable moments”.

Covid quarantine regulations do not allow for funeral services… there will be a military ceremony at a future date, graveside, to properly honor our Dad.

To order memorial trees or send flowers to the family in memory of Charles Staebler III, please visit our flower store.