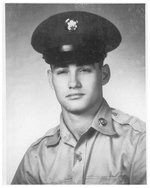 Brian "Allan" Troxle, 69, of Louisville, Kentucky died suddenly on Thursday, January 25, 2018, at his home in Palm Bay, Florida. He was born November 11, 1948.
Brian "Allan" Troxle served honorably as a Sergeant in the United States Army in Vietnam from 1967 until 1970. He received a Purple Heart, National Defense Service Medal, Vietnam Campaign Medal, Vietnam Service Medal, and Sharpshooter Badge - Rifle for his Vietnam tour. He was proud to be a member of the United States Army and proud that he was born on Veterans Day. He served another three years in the reserves and was discharged in 1973 near Independence Day when he returned to his home state of Kentucky.
He was a member of the Carpenters Local 64 working on many of the tall buildings standing in downtown Louisville, he also worked for Overhead Door in Louisville before moving to Florida in the 1980's. In Florida, he also worked with Overhead Door and was self-employed.
Allan graduated from Carl Sandburg High School in Illinois while growing up in Tinley Park, Illinois.
He was an avid fisherman, camper, and overall enjoyed the outdoors. He also enjoyed reading and watching Westerns. He was great with woodworking and tanning leathers too. His daughter often said he was a survivor that knew how to hunt, fish, and live off the land.
He is survived by his love, Cheryl Krey; former wife Marlene Troxle; two daughters, Allison Troxle and Dr. Debra Dean (Stephan); seven grandchildren, Lilly, Gavin, Mikaela, Spencer, Wynonna, Ashley, and Christian; three great-grandchildren; brother, Ron Troxle (Maryanne); and two nieces, Christina and Sarah. He is preceded in death by son John French (mother,Marlene) and ex-wife Sandra Crisler (daughter, Allison).
He will be missed by many.

To order memorial trees or send flowers to the family in memory of Brian Troxle, please visit our flower store.