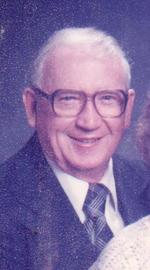 Orben Short, 99, husband of the late Iva Lee Hammonds Short, died Saturday, September 26, 2015 at his residence. Born in Ivis, Ky. January 25, 1916 he was the son of the late Reuben & Ritter Craft Short. He owned and operated a body shop in Hindman, Ky. for many years from which he retired. He was also a World War II Veteran having served in the U.S. Army Air Corp.
He is survived by his daughter, Bobbyetta Short, 2 sons, Jim (Donna) & Jack (Kathy) Short, sister, Dallas Dixon and brother, Gilford Short. 3 grandchildren and 9 great grandchildren also survive.
A service celebrating Orben's life will be held 1:00 pm Tuesday September 29, 2015 at Louisville Memorial Gardens Funeral Home East, 11601 Ballardsville Rd. Visitation will be from 4 to 8 Monday at the funeral home.
Memorials are suggested to Hosparus.

To order memorial trees or send flowers to the family in memory of Orben Short, please visit our flower store.